From Miosix Wiki
Jump to navigation Jump to search

This board has an STM32F103ZE, a Cortex-M3 running at 72MHz with 512KB of FLASH and 64KB of RAM, plus 1MB of external SRAM. In addtion, the board has some nice peripherals including an USB port and a 320x240 LCD display, which are supported by the mxusb and mxgui libraries. Also, there is a microSD socket allowing filesystem support.

To develop for this board you'll need an USB to serial adapter to be able to deploy your code to the board through its serial bootloader as well as to be able to see debug messages as printf is redirected to the serial port on this board. Optionally, you'll need a JTAG in circuit debugger compatible with OpenOCD and Linux, an ARM-USB-OCD was tested succesfully. 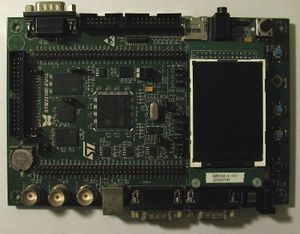 The minimum configuration required is to edit the miosix/config/Makefile.inc file to uncomment the OPT_BOARD := stm32f103ze_stm3210e-eval line. If you had compiled the kernel before, it is recommended to do a make clean (or in the Netbeans IDE, to click on the "Clean project" button) to avoid leaving object files around. After, do a make to compile.

In addition, this board has a couple of board-specific options in the Makefile.inc file. For convenience, the relevant part of that configuration file is reported here so as to be easily located within the file

As can be seen, there are three options for this board: LINKER_SCRIPT, XRAM and CLOCK_FREQ. The comments explain in detail their meaning, so it isn't necessary to further explain them.

As explained before, there is more than one linker script for this board, and the selected linker script affects the way code should be loaded on the board.

This is the default linker script, it is very useful for debugging code on this board, as it locates everything (code, stack, heap) in the external RAM. It has the disadvantage that the loaded code is lost upon reboot (being in a volatile memory) and that code will run ~10 times slower due to external RAM access timings, but for debugging, these are not issues.

To be able to use this linker script you need to program a bootloader into the microcontroller's FLASH memory that allows code loading to the external RAM as well as forwarding interrupts there. This bootloader is in the miosix/_tools/bootloaders/stm32/stm3210e-eval directory, and information on how to install it can be found in the miosix/_doc/textdoc/stm32-bootloader.txt file. For programming the bootloader the stm32flash tool can be used.

This linker scripts put the code in FLASH, so you need to program the microcontroller's FLASH every time you change your code, but code will run faster and won't be lost at each reboot.

A simple way to load code in FLASH is to use the http://sourceforge.net/projects/stm32flash stm32flash] tool. After having installed it on your system, all you need to do is to connect a serial cable between the USART1 connector on the board and your PC. USB to serial adapters work well if you don't have a serial port. Then, flip up the boot0 switch on your board, and hit the Reset key. On the PC side, you'll need to run the

Of course, replace /dev/ttyUSB0 with your serial port device name. After that, flip down the boot0 switch and hit again Reset. The code you have loaded should start.

The board support package of this board simply redirects printf to the serial port USART1. The board has an RS232 connector, so you'll simply need to connect it to your computer via a serial cable, or use an USB to serial adapter. The serial port baudrate is set to 19200baud, 8N1.

On Linux you can use screen. Open a terminal and type screen /dev/ttyUSB0 115200 (Note that to quit from screen you need to type "Ctrl-C, \"). You'll need to change /dev/ttyUSB0 with your serial port device name.

On windows you can use HyperTerminal, you need to configure it to use the required baud rate, no flow control, and select the correct COM port device name.

This will start the OpenOCD program that will connect to the board and listen for GDB connections. If the connection fails on Linux, you may not have installed the UDEV rules for your USB to JTAG device. If this is the case, running OpenOCD as root will fix the issue.

The first command will start the gdb debugger. The following commands are typed into the gdb console, and tell it to connect to OpenOCD, reset the board and stop at the beginning of main() Please not that the load command implies that you are using the stm32_512k+64k_all_in_xram.ld linker script, and will instruct gdb to load your code in RAM. If you are using another linker script that loads code in FLASH you'll need to replace this command with a

that will program the FLASH memory.