The precompiled Miosix Toolchain is compiled for 32bit x86, to be compatible with as many Linux installations as possible. If you have a 64bit OS, you need to install a few 32bit libraries to be able to use it.

If you want to program STM32 microcontrollers, you will also need a tool to the transfer your programs to the microcontroller. A popular choice for boards like the stm32f4discovery that have an embedded STLinkV2 USB programmer/debugger is QSTLink2. The installation on Ubuntu/Debian requires to add a ppa and install it via apt-get. Also, it is recomended to install the udev rules, which allow QSTLink2 to connect to the USB port without the need to run it from root.

Miosix redirects stdin/stdout to a serial port by default on most boards, so it is important to set up serial ports correctly on your development machine. On most Linux distros serial ports, both the physical ones like /dev/ttyS0 and the USB to serial adapters like /dev/ttyUSB0 are owned by the dialout group, so you need to add your user to that group before you can access them.

Note that you may need to reboot your computer before the change takes effect. Also, you need a program to interact with the serial port, like GNU screen.

Download the latest version of the Miosix Toolchain and launch it. The installer will ask for your root password to copy the compiler to the /opt/arm-miosix-eabi directory, and put symlinks to /usr/bin.

If you do not trust the installer and want to verify its content, or you want to install it locally, it is possible to extract the content of the installer with the following command.

Keep in mind that for a local install you will need to set the PATH environment variable to the arm-miosix-eabi/bin directory.

Get the Miosix kernel sources

The preferred way to download the Miosix kernel is through git. If you do not already have it installed you can install it now

Configuring and compiling the kernel

More in-depth information on how th configure the kernel for your board can be found in the Board List, but for now we will assume you have an stm32f4discovery, which is a common board, and briefly show how to get to a blinking LED example.

First of all the miosix-kernel directory is often referred to as the top-level directory of the kernel. It contains, among other, the main.cpp file which is where you can start writing your application code, the Makefile where you can add additional C++ and C source files to be compiled, and the miosix directory which contains the kernel. 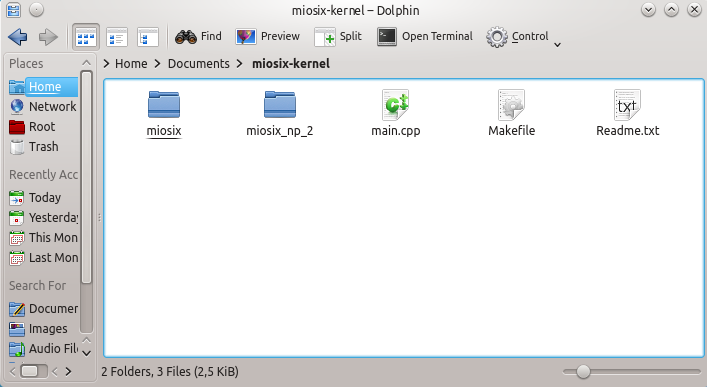 All paths in this wiki, unless they start with a '/' (for Linux) or 'C:\' (For Windows), are intended relative to Miosix's top-level directory, so if we're talking about the 'miosix/config/Makefile.inc' file you can find it within the directory where you have downloaded the kernel from git.

The kernel is configured by editing two files, named miosix/config/Makefile.inc and miosix/config/miosix_settings.h. Open the first one, and select your board. To do so, look for the OPT_BOARD section of the file, which looks like this:

In Makefile syntax a '#' sign denotes a comment, so to select a board you have to comment out (by prepending a '#') the default board selected, and uncomment (by removing the '#' at the start of the line) your board, in this case, which in this example will assume is the stm32f407vg_stm32f4discovery.

Next, edit the miosix_settings.h file and uncomment (by removing the '//' at the start of the line) the following line

(which is towards the end of the file). This is a C++ header file, so the comment syntax is '//'. More information on the meaning of this line can be found in miosix_settings.h, but a short summary is that this line prevents the kernel from putting shutting down the CPU when it has nothing to do, which saves power but interferes with the programming/debugging protocol used to program the board via QSTLink2.

Open the main.cpp file in the top-level directory, and replace its content with the following program:

The Miosix board support package defines the ledOn() and ledOff() functions to control a LED on the board for all the boards that have at least one software-accessible LED.

To compile the kernel, open a terminal in the Miosix top-level directory and type make. If all goes well, the result should look like this. 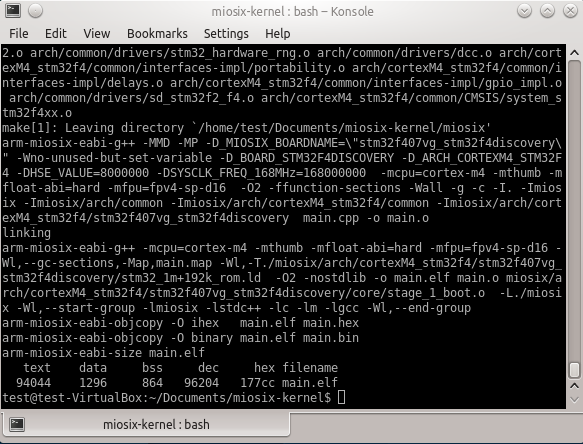 Otherwise, compiler errors will appear in the shell. The number that appears under text in the make output is the size in bytes of your application plus the kernel. If you think that 90KBytes is a bit too much for a blinking led, don't worry. The kernel by default includes support for C stdio functions, filesystem code including Unicode support and the C++ exception handling runtime, all of which can be disabled to significantly reduce code size.

There are two ways to program the stm32f4discovery board. One is to use QSTLink2 directly from the shell you already have open by typing 'make program' (connect the USB cable first!), the other is through QSTLink2's GUI. 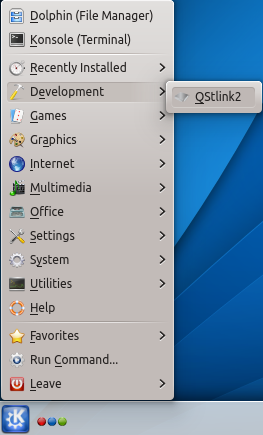 Once you start it, you have to click on Connect, and it should find your stm32f4discovery board. After that, click on Send and select the main.bin file in the Miosix top-level directory. 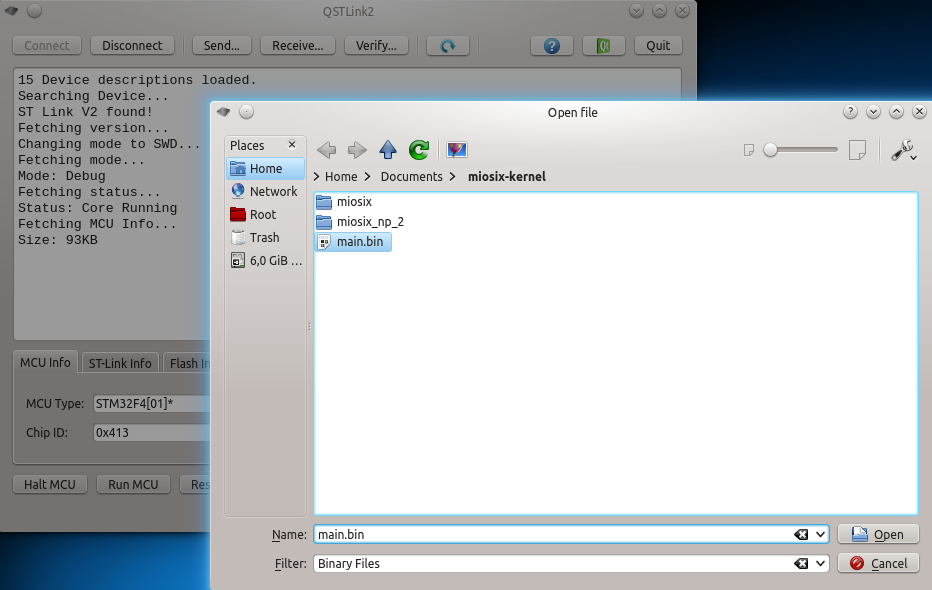 Note that, regardless of using QSTLink2 form the shell or the GUI, there is a bug that in some circumstances blocks the microcontroller until the next powercycle. Therefore, after having programmed the microcontroller, is is recomended to unplug and reconnect the USB cable to powercycle the stm32f4discovery board. At that point, you shuold see the red LED blinking.

You have finished the installation of the Miosix Toolchain. You may want to install and configure an IDE, or the debugger.

If you have chosen to install the compiler locally (i.e: not in the '/opt/arm-miosix-eabi' directory), simply remove the compiler directory.